You make it special 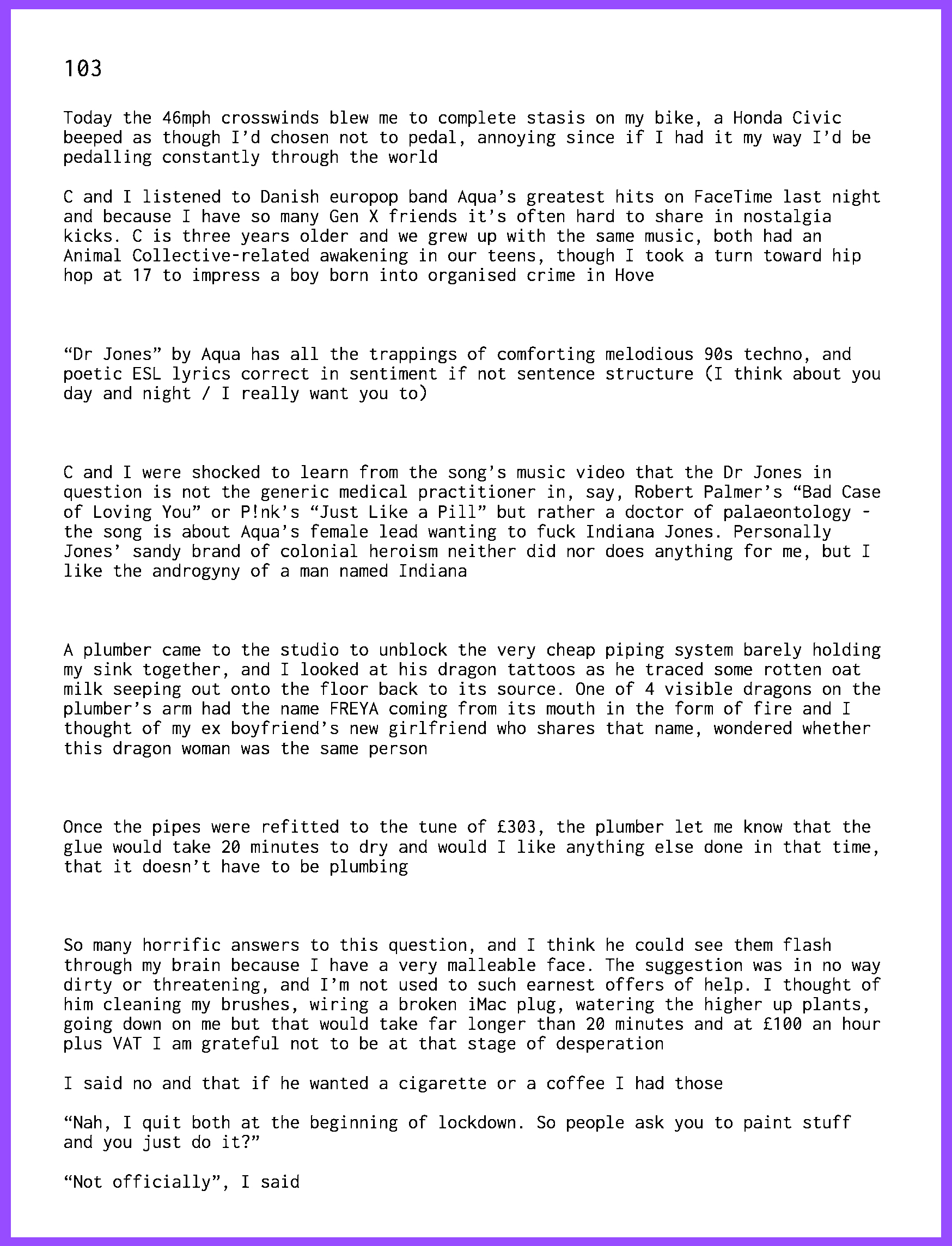 Issy Wood’s constellation of images suggests a stream of consciousness hiding something foreboding, a medieval current creeping into the millennial. Merging the material and immaterial, objects and beliefs, her work empties the contemporary of clarity and releases spirits presumed to belong to the past with an incisive binge of symbols: sphinx-like women with bodies embedded in high-end decorative objects, faceless 19th century maidens with buttery skin, false nails, silver tableware and fussy necklaces, leather trenches and lux car interiors, Judith Leiber minaudieres, and various portraits of Joan Rivers.

At an age that belies her anachronistic rendering style, Wood calibrates her skillful depiction of these personal ciphers with their own effacement. Unlikely crops, implausible vantage points, and uncanny layering—coupled with a “lazy smudgy Renoir pointillism” as she describes it—disrupt moments of mimetic allure with the threat of its undoing. Often just shy of trompe-l’oeil, her paintings give illusionistic entry to an inner world that bares traces of a haunted external one, surreptitiously infiltrating Wood’s most private self.

Personal but not diaristic, Wood’s practice—even her confessional blog “committothedish”—oscillates between disclosure and concealment. Proxies abound in both her painting and writing. Apparitions of faces that manifest in makeup compacts (the Knightsbridge once-over, 2016) and handbags (Expensive Minaudière 2, 2017—here with lipstick and breasts) speak less to the occult or mysticism than a disquieting pareidolia, evoking a world in which objects are substitutes for emotional connection and security. A series devoted to Joan Rivers (né Joan Molinsky) explores an archetype of tragedy and self-disdain veiled by a mask of plastic surgery and opulent material possessions. The late television persona also closely resembles the artist’s mother. In paintings of car interiors, Wood imagines what it looks like to be an unfulfilled middle-age man. Her blog entry “On Cars” meditates on the relationship between a father’s midlife crisis and the seduction of a place to hide from one’s family.

For Wood, surrogates are safe. “Like everybody and trust no one,” she quotes from Lauren Conrad of The Hills on her blog. Or like watching a disaster on the news, it allows a level of remove from which she can observe but not fully re-live the past. Humor is another disguise for truth in Wood’s vocabulary. The artist’s titles give a taste of her subtle comedic timing. In her solo show at Carlos Ishikawa, When you I feel, she riffs on standard therapeutic language for expressing hurt, transforming “you” into “I” statements—a muffled gunshot.

Drawing on her upbringing in a medical family for whom biology and science reigned supreme and mental health was relegated to a devalued category of magical thinking, her enigmatic imagery conjures associations with the unreal or imaginary, but hers is a psychic realm that is emphatically and empirically real. A descriptor she rejects is “dreamlike.” “Try telling somebody waking up in a cold sweat that their dream didn’t feel real,” Wood counters. “Or somebody with a [psychological] disorder that dysmorphia doesn’t have significant and tangible and often dangerous consequences.” On their lush surfaces, Wood’s paintings appear to offer an escape from the external world—or at least the aspiration to do so. They are oblique, atmospheric, mysterious. They are places of interiority, a reckoning with her own inner demons. But they are also encoded with forms of social control that are often imperceptible, yet as tangible and material as the velvet fabric she likes to paint on (a technique that literally sucks the light out), and as antique as the Christie’s auction property she scours for imagery.

Is this the reality we inherited?

Just weeks before the Harvey Weinstein allegations went public in October 2017, Wood posed to me the question, “What is a woman and what makes her scary?” Far too loaded a term and declarative for the murky sensibility of her paintings, she would reject the label of feminist, but Wood’s work traffics in what she described in that same conversation, as a sort of crisis of what it means to be feminine.

Not unlike Lee Lozano who, too, had a complicated relationship with her own gender, Wood’s paintings reflect the subjectivity of a cis-female who has desired escape from her socially-prescribed role. Wrestling with traditional femininity through anthropomorphized objects, a psychic angst characterizes both artists’ work. Yet while Lozano’s aggressive gestures and phallic boldness sought disassociation from the feminine, Wood’s painterly approach is ambivalent, getting at something insidiously invisible.

Probing the dark underbelly of beauty, Wood has painted different implements that one might use for purging: a toothbrush, a spoon, or even, a screwdriver—“such a manly tool to achieve some idea of female-ness,” in her words. The perverse image conjures Lozano’s iconography of tools and hardware reimagined for a teenage girl that, both desiring and resenting an archaic patriarchal ideal of what is attractive, ultimately degrades her body and mind. In paintings like MTness, 2018 and Giantess, 2016, individuating facial features of ubiquitous Old Masters portrait sitters are obliterated, bodies rendered hollow—replaced, respectively, with the tall back of a classical chair, or rings of metal scaffolding like human ribs. Presenting an idea of a lady as delicate but not fragile both figures are consumed by hair, which—along with nails and teeth—symbolize a semblance of strength for Wood, as each contains the protein Keratin that protects cells from damage. Though the nails she paints are typically false—of the suburban manicure variety or the luxurious extensions worn by noblewomen in ancient aristocracies.

Glamour is another protective façade, a kind of armor—for anxieties about the female body, economic class, mental health—and, thus, intimately entwined with the experience of pain. In The Rest, 2018, a zebra purse hangs opens at its stomach: writhing in agony or pleasure, mournful or ecstatic? That Wood’s decorative treasures often come from auction, painted from the catalogues or online sales, invokes a history of divorce and death in which possessions are pendants of settlement and loss. It also represents the ache of wanting something, some life, that belongs to someone else, to fill a void in one’s own. What and who has value? What is cast-off, and what does it feel like to be discarded? The accumulation of expensive tokens holds the promise to compensate: for stability, for love, for status, or feeling of status, that the owner was perhaps denied. Conjuring ghostly, age-old repressed power structures like class, Wood’s paintings reveal the antiquated lurking in both society and the psyche.

Because of her rendering style, easily mistaken for the imprint of another time, it seems especially crucial to art historically locate Wood. Among other artists of her generation working in what one might characterize as outmoded strategies of representation, she emerges with a singular dexterity for capturing estrangement from the contemporary, a moment laden with legacies of a past still present. Surrealism has been suggested as the go-to lineage, alluding to parallels with another moment when Enlightenment notions of rationality and reason faced heightened distrust. But even beyond the maligned association with women Surrealists, like Lenora Carrington and Dorthea Tanning, perceived as secondary figures consumed with fantasy rather than revolution, the formal comparison falls short.

Where the Surrealists examined the relationship of individual psyche to surrounding world from a perspective that privileged the “pure” unconscious mind as an idealized reality beneath the external, Wood considers interiority from a different vantage. Throughout her paintings, and her writing, Wood resists the notion that the inner world has ever been, or could ever be, a self-sufficient or autonomous realm. Vulnerable and precarious, contingent on social forces and layers of history that at different moments appear to resurface—or that have never gone away—her imaginary is inseparable from the conditions of the world and of lived, material experience. Not even a hybrid of interior and exterior, Wood’s reality is an equivalence between the two.

In her words: “What does ‘from life’ even mean in this day and age?”